We are a group of women (but men are welcome!) who have an interest in textile art and embroidery. We are of mixed abilities and there is no need for you to be able to sew to come and join us - there are no tests!
New members are always welcome - why not call in and join us as a guest for a few months?
Meeting fee for visitors is only £5.
Our meetings vary - we have talks and workshops, show and tell - we also have lots of weekend workshops and playdays. For details of what's coming up (and what's been and gone!) check out our programme below...

Another well-attended meeting this month, and MORE new members - welcome to you all! We're happy to have you with us. Almost as good, two lots of cake from Margaret W and Anne B, which tasted good AND helped us to raise funds.

Our speaker last night was Alice Fox who told us about her artistic journey. Alice works with a mixture of print and stitch on paper, linen and silk, and what you could loosely term natural dyeing - using the rust and decay from objects found in the landscape, to colour and shape fabric which she then uses to create works of art. 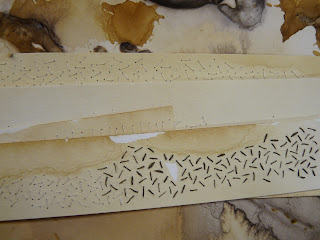 One of Alice's smaller pieces of work, stitch on paper

On leaving Bradford College in 2011, Alice began what is in textile art terms a meteoric rise to fame, being the joint winner of the Graduate Showcase at the Festival of Quilts and then going on to be the artist in residence at Spurn Point in 2012 which was the focus of her talk. 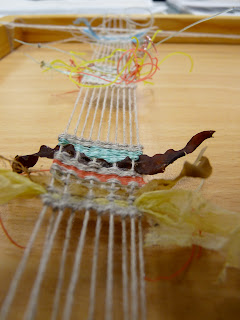 She explained to us how she started to get a feel for the landscape and just spent lots of time walking on the beach collecting found objects which she incorporated into small "weavings", each one telling a story of what had been lost and found and illustrating that day's walk. 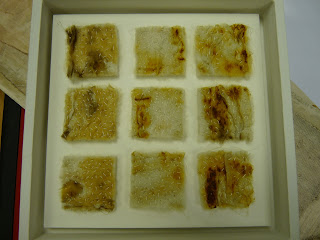 She showed us some work which had been made from larger pieces of fabric which had been tied around rusty fixings attached to wave breaks and other large fixtures along the coastline surrounding the Spurn Point lighthouse. She continued to experiment with this technique, becoming braver and leaving fabric tied up outside for several days or weeks so that it took on the textures of the metal, sand and even plant-life found on the shore. Stitch was then used to embellish the "dyed" fabric. 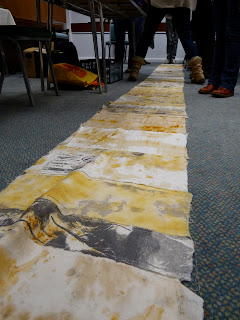 Alice's residency culminated in an exhibition displayed in the lighthouse, with one piece hanging down the centre of the building measuring a massive 4.7m (that's 15 and a half feet!) What's more, the whole length was hand stitched, to a greater or lesser degree - no wonder Alice was asking herself what she had taken on! 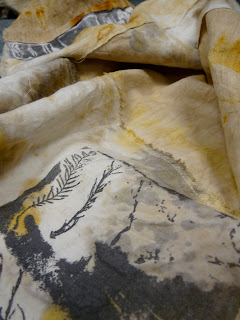 Above, you can see a detail of the long piece, which also includes collographic printing using plant forms found on the shoreline.

(Definition of Collograph - It is a simple form of printing using found materials that are arranged in a collage form - the objects are usually stuck down and then sealed and inked and used to make prints).

Big thanks to Alice for such an informative talk, and good luck in her forthcoming projects. Why not check out her website and blog for more details of what she's up to.